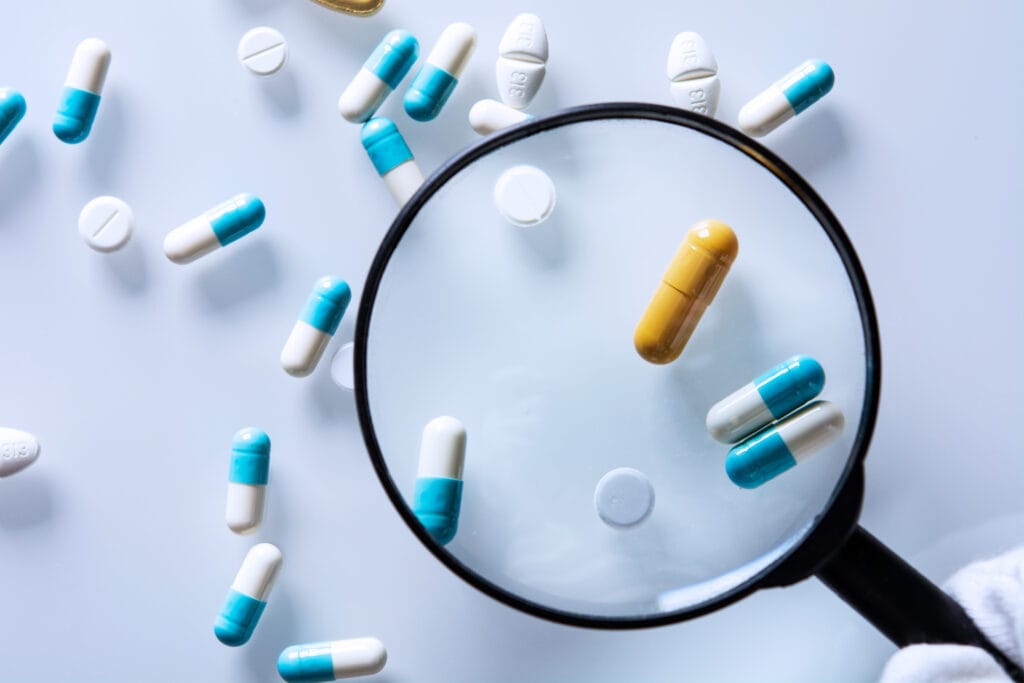 Erectile dysfunction (ED) is a common concern for most men. ED can happen to men of any age, and is a common condition with many medical and non-medical treatment options.

ED becomes more common as you age. Nearly half of all men between the ages of 40 and 70 will experience ED at some point during their lifetime.

ED often has underlying medical causes such as cardiovascular disease or diabetes, which affect blood flow in the body. ED can also be caused by certain medications or excessive alcohol use. Other factors such as obesity and stress have been linked with ED. These factors may increase the risk for ED in some individuals.

Numerous medications are also known to be associated with erectile dysfunction, including some blood pressure medicines, antihistamines used to treat allergy symptoms, ulcer drugs, and antidepressants.

If you’re experiencing erectile dysfunction, it’s a wise choice to check out your medicine cabinet. Let’s take a look at some of the medications that may affect ED.

Hypertension (high blood pressure) can lead to ED by causing the arteries to harden and narrow, restricting blood flow to the penis. Hypertension medications are known to sometimes cause erectile dysfunction as a side effect of their use. Taking blood pressure medications can exacerbate the situation if you are already experiencing erectile dysfunction.

There are several classifications of drugs used to treat hypertension:

Here are the brands of drugs used to treat hypertension that have been linked to ED:

Benzodiazepines are used for anxiety relief because they slow brain activity, making people feel relaxed and less stressed. They can also cause physical dependence, which means that you need more of it to produce the same effect over time. This exposes users to increased risks of heart problems or respiratory failure. In some cases, benzodiazepine use may lead to ED, which typically goes away after stopping treatment with this medication.

Antidepressants alter the level of serotonin in one’s brain, often causing an imbalance of other hormones that regulate sexual function. One such hormone is testosterone. Testosterone influences sexual arousal and one’s ability to achieve an erection. When testosterone is too low, erections can be hard to maintain.

Antidepressants known to cause erectile dysfunction are:

It is common for men with diabetes to suffer from erectile dysfunction — as a matter of fact, it’s estimated that at least 25% of men with diabetes have low testosterone levels. The dysfunction stems from the damage caused to the nerves and blood vessels from poor blood sugar control for a significant length of time.

Like many other illnesses, the drugs prescribed to help with diabetes can also cause or exacerbate ED. Metformin is the most commonly prescribed diabetes medication that can cause erectile dysfunction.

While it’s important to talk about all of the prescription medications that could be causing ED, along with the illnesses they are used to treat — it is also worth mentioning recreational drugs. Some recreational drugs can also affect maintaining erections.

Recreational drugs that can cause erectile dysfunction include:

Don’t let Erectile Dysfunction Get You Down

As you can see, the list of medications that may affect erectile dysfunction is pretty lengthy and a bit overwhelming. We understand that battling an illness on top of ED can be difficult, and you may feel like no one understands, or there is nowhere to turn for help.

NonMedErect is the first management option for erectile dysfunction that does not require medication, surgery, or invasive procedures. It offers a non-medical alternative to other treatments and comes with no side effects.

Our innovative solution is based on a prosthesis developed for US Army Soldiers who sustained catastrophic genital injuries on the battlefield. It is a prosthesis that straps to the body securely and comfortably, and after it was reviewed at a US Army Level 1 Trauma Center, it was given a favorable review by the Chief Genital Reconstruction Surgeon.

NonMedErect is designed to move with the body, giving your partner a more natural sensation. This prosthesis is a favorable solution for men who have tried other medical treatments without success, but who are hesitant to undergo implant surgery. Since this is a non-medical device, you do not need a doctor’s prescription to purchase it. If you would like to hear more about our product, please contact us today, and our highly professional team will speak with you, and offer you assistance in confidence.